Researchers from the UK Energy Research Centre (UKERC) told the BBC promises of lower prices and greater energy security from UK shale gas were “hype” and “lacking in evidence”.

UKERC, an academic consortium covering 30 institutions, has produced a report on the future of gas in the UK.

The Treasury said the potential of shale gas was “too big to ignore”.

The report authors said shale gas – a natural gas that can be drawn from rock through hydraulic fracturing, or fracking – was so early in its infancy it was impossible to know how much could be extracted and at what cost.

But they said it was most unlikely to make a substantial difference to prices or to the security of energy supplies in the UK.

Supporters say the fracking of shale gas could significantly contribute to the UK’s future energy needs, but critics say the process could lead to environmental problems.

“It’s extraordinary that ministers keep making these statements. They clearly want to create a narrative. But we are researchers – we deal in facts, not narratives. And at the moment there is no evidence on how shale gas will develop in the UK.

“Shale gas has been completely oversold. Where ministers got this rhetoric from I have absolutely no idea. It’s very misleading for the public.”

His UKERC colleague Prof Mike Bradshaw cast doubt on plans for a“sovereign wealth fund” from shale gas for the north of England.

“Talk about a bonanza is incredible,” he said. “It hasn’t happened and it might never happen. Even if shale gas does get developed in the north of England, the extra amount of money generated will probably be relatively small – so the fund will be even smaller.”

The researchers said they were not against searching for shale gas, but objected to the rhetoric used by its supporters.

The United States has enjoyed a shale gas boom. But Prof Bradshaw said the future of the UK industry was uncertain because the geology is different; environmental safeguards are stronger, and the industry had not yet persuaded people to host drilling pads in the neighbourhoods.

“There is huge uncertainty about all these things,” he said.

“Only one thing is virtually certain – in Europe shale gas is not going to be a game-changer.”

The group’s report charts a limited future for gas as part of the UK’s electricity system. It says in order to meet Climate Change Act targets, gas-fired power generation will need to have almost completely stopped by 2030.

As UK shale gas is not expected to be produced in substantial quantities until the 2020s, that leaves a small window of opportunity for investors in the industry.

Globally, it says, gas must not be burned for electricity after 2035 if the world is to get on track to avoid dangerous climate change – that is unless new technology is used to capture the CO2 emissions. 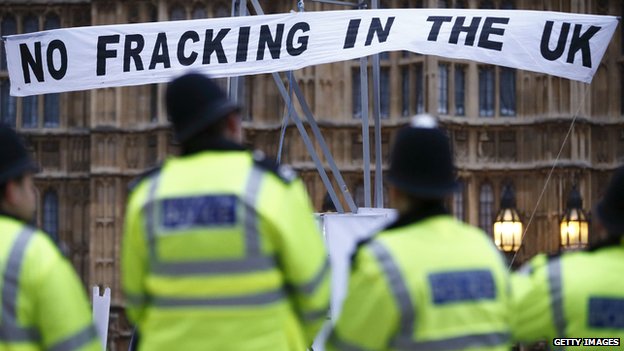 The process of fracking is opposed by many people, including some environmental groups

It says gas may provide a “bridging fuel” to help other nations out of coal-burning and into clean energy systems – but this did not apply in the UK, which had its own “dash for gas” in the 1990s. The use of gas in the electricity system had peaked and would not rise again because of climate targets, its authors say.

This is why the government has introduced a support mechanism for investors to build new gas-fired power plants needed to back up erratic renewable energy.

There has been tension within government over how heavily shale gas should be promoted. The Lib Dem Energy Secretary Ed Davey haspreviously warned against “hyperbole”.

Pro-shale gas campaigner Nick Grealy told BBC News: “The UK gas and oil has been there for over 200 million years. There is continuing uncertainty for UK citizens who own the resources.

“The question of the viability of shale gas in the UK has to be settled once and for all for everyone’s interest – and that can only be done by starting to drill wells now.”

The Treasury said shale gas had “great potential to be a domestic energy resource to make us less reliant on imports and open up a wealth of job opportunities”.

A spokeswoman added: “Independent reports say that it could lead to lower energy prices across the EU. It can also act as a bridge towards a low carbon future.

“The sovereign wealth fund is a very interesting idea which we want to explore as a way of making sure the money that comes from the shale gas that we’re going to be pulling out of the ground is not squandered on day to day spending but invested in the long-term economic health of the north of England and other areas that host shale gas developments to create jobs and investment there.”